Plantar Fasciitis is often a chronic heel pain, most regularly felt on the under (plantar) side of the heel(s), especially after rest, such as when first getting out of bed or after having been seated. The pain is caused by an injury to the plantar fascia which is a fibrous structure in the sole of the foot. The plantar fascia attaches to the heel, stretching along the foot and attaches into the joints where the toes meet the foot (metatarso-phalangeal joints). The thickest (and area most likely to become injured) is the section of the plantar fascia which runs from the 1st metatarso-phalangeal joint (ball of the foot) to the medial aspect of the heel (side of the heel nearer to the middle of the body) and it is at this attachment where the pain is most commonly felt.

Tissue Stress Theory postulates that all body tissues have specific acute and chronic load levels that they can tolerate at any given time. It is well known that physical training will increase the load that body tissues can tolerate. For example, a couch potato who takes up running is likely to become injured if that transition is not made slowly. Going from 0 to 5kms overnight is likely to result in an injury quite quickly. Weightlifters can lift very large loads because they have trained their muscles to tolerate higher and higher loads over time. However, even the best athletes will become injured if they exceed the acute (short term) or chronic (longer term, or regular) loads than their body tissues (bones, joints, ligaments, muscles and tendons) can tolerate.

Plantar Fasciitis is just one such injury where the load has exceeded what the plantar fascia can tolerate. In every case this is specific to the individual, their particular anatomy and the load which has been applied to their plantar fascia in the long term and short term.

The Plantar Fascia forms a part of the arch of the foot and is known to activate as the heel raises off the ground when we walk or run. When working effectively it becomes tightened as the heel raises, and assists with stiffening the foot to act as an effective lever to push off with as the foot leaves the ground.  With anatomical variations between individuals this process may be more or less efficient, depending on a number of factors. For some people with a flat foot, this mechanism (known as the windlass mechanism) becomes quite ineffective. In extreme cases this mechanism does not work at all and walking become quite laborious. These are the people who in years gone by would be turned away by the army, as marching long distances would be impossible.

In Plantar Fasciitis, like so many other injuries it is important to reduce the load placed upon that tissue to allow the structure to heal. Once again, this must be patient specific and is not a ‘one size fits all’ prescription. A thorough history, gait analysis and lower limb examination will be required to establish how this load management should be achieved. For some patients this may only be a slight change to their daily activity. For others it might entail significant short term changes. The treatment may also include stretching of the plantar fascia and calf muscles, supportive strapping, massage, footwear changes,  orthotics or shockwave therapy.

For one patient the most important aspect of managing the load may be to stretch very tight calf muscles which are the primary cause of pronation and increased plantar fascial load. For others it could be to reduce running activity in the short term while stretching and massaging the plantar fascia. For others, the most significant issue could be the basic anatomical make up of the foot which places a high degree of load on the plantar fascia at every step. One such anatomical variation is a medially deviated subtalar joint axis causing the very flat foot which I alluded to earlier. In this case, the only way to reduce that load is to provide a force on the medial side of the subtalar joint axis, so that the plantar fascia and tibialis posterior muscle can work effectively to invert the foot as the heel comes off the ground during gait. An appropriately designed foot orthotic can do this by inverting the heel and everting the forefoot. A kinetic wedge at the front of the orthotic will further enable 1st Ray plantarflexion also, reducing the load on the plantar fascia significantly.

When discussing orthoses, footwear is also an important part of the equation. Even well designed orthoses are unlikely to be fully effective if they are worn inside a completely non-supportive shoe. In most cases I will recommend a supportive neutral jogger, work or dress shoe that will allow the orthotic to control the foot motion without too much compromise. Equally, if the orthotic and shoe and are only worn for a small percentage of the patient’s standing or walking time per week, the orthotic is not likely to have a dramatic effect.

Moving beyond tissue stress and load reduction, Shockwave Therapy has also been demonstrated to produce a healing response in some patients with plantar fasciitis. This is another modality used effectively at Hills District Podiatry in many cases. Once again, the treatment needs to be patient specific and what works well for one patient may not be the most appropriate solution for another.

In conclusion, I would like to stress that plantar fasciitis, although a common condition, must be treated in a very patient specific way. There are numerous variables that must be taken into consideration. There is no ‘one size fits all’ treatment. The best way of achieving a positive outcome is to seek the advice of an experienced professional such as a podiatrist who is able to identify the cause and reduce the load effectively, allowing the injured structure to heal. 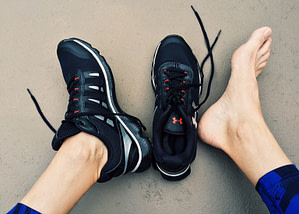 « Do you experience foot or leg pain when you are walking or running? Perhaps you need orthotics.
Back to Services
Summer Is Just Around The Corner »

Book an Appointment with us